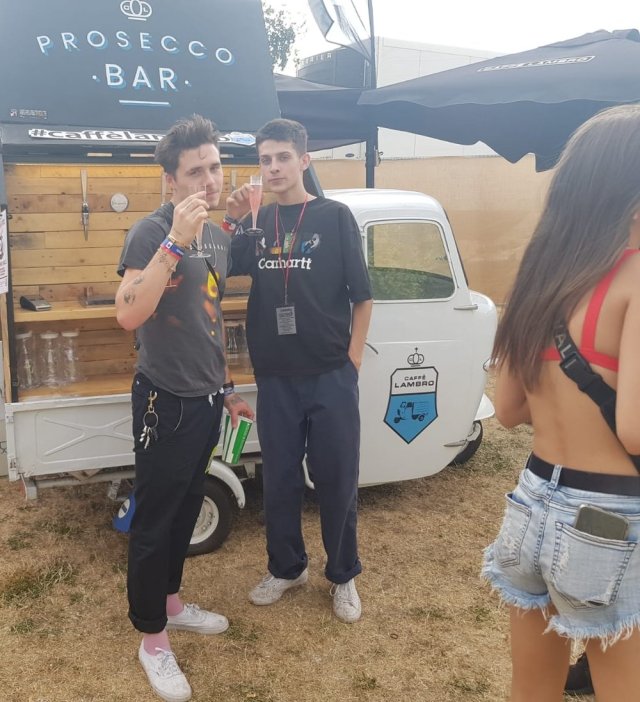 We’ve had some fantastic weather for festivals this summer, and there’s plenty more where that came from.  The Caffe Lambro fleet of vintage Italian vans have been refreshing the revellers, pouring prosecco all over the place and the gorgeous guys and girls who came out to play have been lapping it up. We’ve made quite a name for ourselves in the VIP areas of all the hottest festivals this year, taking the summer season by storm, and it’s not over yet.

We kicked off the summer in style with a brand new music festival called the Neighbourhood Weekender, in Manchester, which was brilliant. We highly recommend it. Beth Ditto, Tom Walker, the Courteeners, and Noel Gallagher’s High Flying Birds had us grinning from ear to ear as we filled flutes of bubbly and sang along.

Our popular little van Enzo made his debut on the festival circuit this year, parked in the shade and loving the attention, in the VIP colonnade at ParkLife Festival, in Manchester; where we snapped some happy campers slugging back bubbly and bopping along to the funky beats of Lorde, The XX, N.E.R.D., Skepta and caught our first sighting of Liam Gallagher.

Then Enzo’s brother Luca rocked up at Download Festival in Derbyshire to collaborate with Cranes Drinks in the VIP area. The cranbollini cocktails were going down a treat alongside our prosecco, which was ‘better than last year’s’ apparently! After that compliment we were ready to rock out to the classic anthems of Guns n Roses, Avenged Sevenfold and Ozzy Osbourne all weekend.

We were very excited to see The Killers, Manic Street Preachers, and Camila Cabello at Isle of Wight Festival. Of course, we also saw Liam Gallagher again but he didn’t remember us from that crazy night we spent together at Parklife. Ahem, we were serving bubbles and he was singing, what did you think we meant?

Morrissey might have disappointed us all by cancelling his tour dates and not playing at Sounds of the City in Manchester, but we were still chuffed to bits to see Shed Seven, Beautiful South and the awesome Rag n Bone Man while we were there.

But the highlight of the festival circuit so far has to be pouring bubbly for Brooklyn Beckham at Wireless Festival in Finsbury Park, London. Our ever popular van Luca made this new celebrity friend to namedrop for the rest of his days, while Beckham and his entourage tried to keep up with the drama surrounding headlining act DJ Khaled pulling out while Drake played a surprise set.

We might have been there, seen that, and done it all, but did we get a photograph with you? There’s still time to make yourself as famous as us – see you at Lovebox, Latitude, Bluedot, Kendal Calling, Reading Festival, Rize (formerly V Festival), On Blackheath or Festival No 6… Come find us!